The Problem With Sioux Falls Elections

There is a time bomb ticking in the Sioux Falls city election system that could frustrate the intent of the voters at least every eight years. We would be wise to defuse it.

The 2010 Sioux Falls mayoral election demonstrated a flaw in our municipal election system. While there were popular candidates in the race, many voters were disappointed by the limited choices they faced in the runoff election. Some felt it was a classic “pick the lesser of two evils” situation. I hope city leaders will improve our election system before we elect our next mayor.

We Had Five Strong Candidates

In the non-partisan 2010 city election, there were five viable candidates to replace Mayor Dave Munson. Three mainstream candidates, Bill Peterson, Vernon Brown and Pat Costello, all had strong establishment credentials and were well thought of in the community. Any of them would have likely been a popular winner.

The other two candidates in the race were Kermit Staggers and the lone Democrat, Mike Huether. Huether was less familiar to many, but Staggers was a well-known character with an unconventionally frugal approach to public spending.

Three Moderates Mathematically Cancelled Each Other Out

On election day, the three moderate candidates split 50% of the vote between them. But that was not good enough. One fourth of the vote went to Staggers while the remaining one fourth, perhaps mostly Democrats, went to Huether. The top two vote getters, Huether and Staggers, moved on. 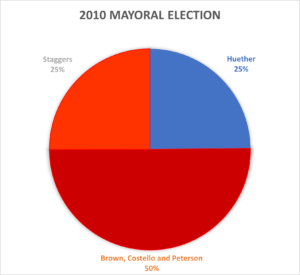 Two weeks later, the runoff featured the Democrat against the most conservative candidate. Voters wondered why none of the mainstream candidates were in the runoff. Many feared our community’s economic growth might screech to a halt if the frugal Staggers was elected. Huether won.

Only 25% of Voters Got What They Wanted

In the end, the lone Democrat beat four strong Republicans in the 2010 mayor’s race. That is a surprising outcome. One could argue that 75% of voters did not get what they wanted from this election. The 50% who wanted a moderate Republican didn’t get one of their favorites. And the 25% supporting the very conservative candidate lost outright.

The result could have served as a wakeup call to city leaders that our election system needs to be modified. But unfortunately, it didn’t. People in government are motivated to resist changes to the status quo, even when the need for change is obvious.

Plurality Voting Does Not Work Well When There Are Several Candidates

Elections in South Dakota use what is called plurality voting where voters must pick one, and only one favorite. With plurality voting, whoever gets the most votes wins. It works fine in two person races, however there can be odd results when there are multiple candidates running for a single office. It has twisted the results of at least one mayor’s race in Sioux Falls and some city council races as well. Luckily, there are other, more effective ways of selecting a popular winner from a crowded field of candidates.

Ranking is Better When You Have Multiple Options

Instant runoff voting (or ranked choice voting) is such an option. It is quickly growing in popularity around the country. When there are multiple candidates, voters simply rank as many as they want, in order of preference. When votes are counted, less popular candidates are removed, and their votes reassigned to the voter’s next favorite candidate until someone reaches 50% of the vote.

Ranked choice voting is used in municipal elections around the country including five cities in Minnesota. It produces winners that most people find acceptable. And it encourages candidates to tailor their messages to appeal to all voters, not just their constituency. It has the added benefit of avoiding expensive, low-turnout runoff elections.

Most Voters Would Likely Have Preferred a Mainstream Republican Mayor

In the 2010 election, one could credibly argue that the three mainstream Republican candidates were interchangeable. Their voters would have likely picked the other moderates as their second and third choices. So, one of them would have eventually reached the required 50% threshold to be elected. The two finalists in the runoff that did occur would have been unlikely to pick up many votes elsewhere.

The story has a happy ending, at least for the city if not all of the candidates. Huether turned out to be a popular and effective mayor and was easily reelected four years later. That was lucky, but not inevitable.

Another Problematic Election Could Be Headed Our Way

Sioux Falls is susceptible to a crowded, competitive mayoral race every eight years as our mayors are term limited out of office. Voters could encounter another frustrating runoff choice in 2026, when Mayor TenHaken’s term ends. Multiple candidates will likely seek his job. The city council and the charter revision commission should work together to improve our voting system before that happens.