South Dakota’s political system is messed up. We don’t let a large number of independent voters play a meaningful role in our publicly financed primary elections. Meanwhile, the Republican dominated legislature is skewed well to the right of traditional South Dakota values and is increasingly dysfunctional as it battles internally. Luckily, there is a straightforward fix available for much of what is wrong with South Dakota politics: open primaries.

We inherited an election system that no longer seems fair or appropriate. It is dominated by two political parties whose relevance is diminishing. The parties control our state election laws and the process for running elections. They make the rules and hold their own primary elections at public expense. For the most part, Republicans put forward candidates beholden to the political establishment and the Democrats do the same. No one is motivated to prioritize what regular South Dakotans want.

At the same time, tens of thousands of South Dakota voters have chosen to not affiliate with either party. Many of them are young people, turned off by the bickering of their parent’s political parties. So, they are punished by having little if any influence on who represents them in Pierre or D.C. 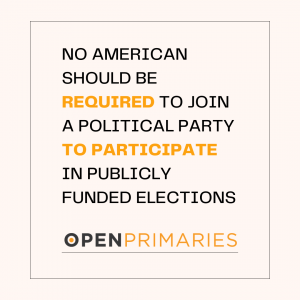 This legacy election system is not democratic. It wasn’t contemplated by the founding fathers. It doesn’t derive from the constitution. It evolved politically long ago and may have worked okay in the mid-20th century when politics were mostly conducted out of the public eye. But then the world changed. Politics got more transparent and intense with the arrival of the internet, social media and 24/7 news. Now we can all see that something is seriously wrong with our political system. Thank goodness, we can do something about it.

Let’s go back to basics. The purpose of an election system is to select leaders and representatives. Given our strong democratic tradition in South Dakota, our elections should be fair, transparent and open to all, regardless of political persuasion. Preferably, the system should produce winners who feel an obligation to represent or lead all the people, not just a partisan minority. Open primaries would do all of that.

I am part of a group called South Dakota Open Primaries. We are proposing an open primary election covering the three congressional offices, the governor, the legislature and county offices. It would be a South Dakota primary. Not a Republican primary nor a Democrat primary. All registered voters would get to vote. All candidates for an office would run against each other in the primary, with the top two advancing to the general election. Here’s an example of how it might play out.

All candidates for an office, say governor, would run against each other in a single June South Dakota primary. There might be half a dozen candidates, maybe three Republicans, two Democrats and an independent. All registered voters would get to vote in the primary. That seems fair since the public pays for those primary elections. The two candidates with the most votes would advance to the November general election.

In a red state like ours, that might mean two Republicans could occasionally advance to the finals. But since Republicans are only half the registered voters in the state, it shouldn’t happen often. But if it does occur, Democrats, Independents and moderate Republicans would likely push the more moderate of the two candidates to victory. In all events, candidates would be wise to structure campaigns to appeal broadly to all South Dakotans, and not just their party faithful. 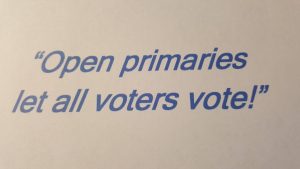 All Voters Get to Vote

But the most critical point, and it is worth emphasizing, is that all South Dakota voters would get to vote in the open primaries. No one would be left out of the publicly financed election. Independents would finally have a meaningful role in the process. Seems fairer than our current system, doesn’t it? But not everyone would like it.

Strident, hardline partisans do not do well in such an openly competitive system. They currently have control of our politics and are reluctant to give it up. So, we suspect we may eventually hear objections from politicos on both sides of the aisle about this proposed improvement. But we hope their objections are transparent to voters. 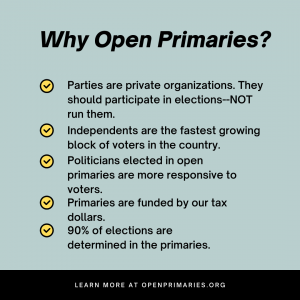 We Are Just Getting Started

South Dakota Open Primaries is just starting this two-year process to improve South Dakota elections. We have filed our proposed constitutional amendment with the state and hope to have it finalized in a couple months. We will be gathering signatures in 2023 and then working to win public support in 2024. After this change is approved, it will make a big difference in 2026 in South Dakota’s first open primary election. After all, open primaries let all voters vote!