Sometimes you can learn a lot by checking out what the neighbors are up to. They might have found a way to get a greener lawn. Or bigger tomatoes. Maybe they have a reliable handyman you can borrow. Or maybe they have even found a better way to run their elections.

This is the case for one of our neighbors to the north, Fargo, which has adopted a simple voting system that is superior to ours. It is less expensive and does a better job than ours of giving voters what they want. It is called approval voting.

Sioux Falls holds city elections in the spring every two years. We elect some city council members each time. Every four years we also elect a mayor. And we use an old voting system to do it.

We use plurality voting which requires voters to pick just one candidate regardless of how many might be running for an office. If no one receives over 50% of the vote, voters must return to the polls three weeks later for a runoff. That’s a waste! Citywide runoffs reportedly cost $80,000, less if the runoff is only for a district. The runoffs put an unnecessary financial burden on the city and on candidates. And they force voters to once again head to the polls.

Plurality voting is an old-fashioned system that can frustrate voter intent. It, “is the worst voting method there is” according to Aaron Hamlin, executive director of the Center for Election Science. Plurality voting “tends to split votes for moderates. It favors more polarized candidates.” We saw that happen in the 2010 Sioux Falls mayor’s race when three moderates split 50% of the vote and none advanced to the runoff. That’s why we should look north for a better option.

Sioux Falls and Fargo have much in common. They are about the same size, with a metro area population of over a quarter of a million people. Both are the largest city in one of the Dakotas. They are on the far eastern edge of their state, on Interstate 29. Each has a Scheel’s, a Costco and a large Sanford Health hospital. In other words, Fargo is the community in the Dakotas most like us. And they found a fix for their election frustrations. 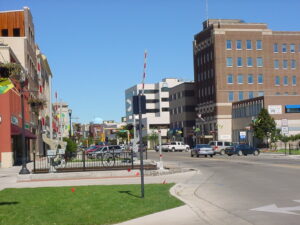 Disappointed with their plurality voting system, Fargo voters adopted a new approach called approval voting in 2018 and have used it since then. Their experience through two election cycles demonstrates that approval voting is easy to use and doesn’t require a change in voting systems or software.

Approval voting is more expressive of voters’ intent. It ensures popular winners. With approval voting, each voter may choose (approve) any number of candidates, and the winner is the one approved by the largest number of voters. Ultimately, the winner is both popular and likely to beat all rivals head-to-head.

Candidates are rewarded for appealing to a wide swath of the electorate. They tend to attack less and collaborate more. More candidates seem to run. Candidates who alienate some segment of the population likely may struggle. And approval voting eliminates the spoiler effect that plagues plurality voting.

The election produced popular winners while the city, the candidates and the voters were saved an expensive runoff.

Voters in Fargo reportedly find this election system easy to understand. The city auditor was asked if he received many questions about approval voting. He responded, “We really haven’t. I think it is a fairly simple process.” The ballot is so familiar looking, that many hardly notice the change.

After a couple of election cycles, Fargo voters are reportedly used to the option of approving more than one candidate. Some voters choose to pick one, and some approve all that they like. Either way works.

While the new approach is seemingly working well, not everyone appreciates progress. Unfortunately, some wary state officials are rumored to be threatened by approval voting, fearing it could grow in popularity and spread. Change, even positive change, can pose a threat to those whose self-appointed duty is to preserve the status quo.

We Can Use Approval Voting in Sioux Falls

Our neighbors to the north are onto something. They figured out that approval voting is a simple improvement in traditional plurality voting. It eliminates the need for expensive, low turnout runoff elections. It also produces popular winners and better reflects the wishes of the voters.