Over a period of many decades and four generations of one family’s leadership, a South Dakota business quietly dominated its industry. The company was Western Surety Company. The family was the Kirbys. And the industry was the small, miscellaneous fidelity and surety bond business, which is an obscure part of the nation’s property and casualty industry. The company’s success was built upon a single-minded focus on convenience, quality and speed of service.

Western Surety Company was an inconspicuous member of the local community. At various times during the 20th century, it was one of the larger employers in Sioux Falls. But few knew exactly what it did. Even some long-time employees weren’t sure.

Joe Kirby founded the company in Sioux Falls in 1900 to provide court bonds for his thriving law practice. He was born in Iowa and moved to the Dakota Territory in 1886. Joe quickly established himself as a courtroom lawyer and entrepreneur. He helped found a bank, a railroad and the surety company. But his focus was on the courtroom. He appeared before the state supreme court hundreds of times and the US Supreme Court six times. The business grew slowly during Joe’s lifetime. 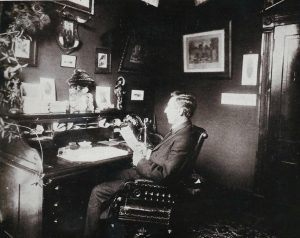 Dan Kirby joined the business in 1917 and was the first family member to make it a career. Dan was Joe’s youngest male child, and a lawyer like the other three. He started traveling the state and region to call on insurance agents and promote the business. The company experimented with various types of casualty insurance, but that ended in the late 1920s when the focus shifted almost exclusively to bonds. 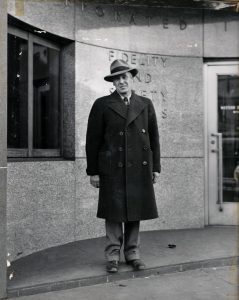 Dan’s son Joe F. joined the business in the 1940s and became president in 1950. Joe’s cousin Tom Kirby, Jr. was also involved in the business and law office in the third generation. As company president, Joe increased the focus on the best service possible. He was known for his impatience and frustration with delays. The company’s motto became “Everything is answered the day it is received.” The company had a very conservative approach to underwriting risk. Its focus was on service and convenience, not taking risk. While many insurance companies would handle the same products as Western Surety, they didn’t do it well. Their service could take a long time, and they often didn’t know what they were doing. During the 1950s and 1960s the company gradually expanded to most parts of the country. 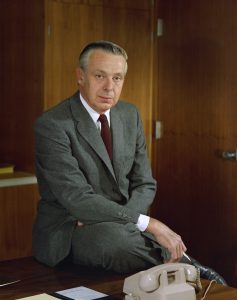 Joe F. Kirby in his office at Western Surety

In the 1970s, the fourth generation of Kirbys joined the family business. About the same time Kirby Law Office officially closed its doors after nearly a hundred years. Four members of the fourth generation, all lawyers, ultimately owned and operated the business. I was part of that group along with my brothers Dan and Kevin and my second-cousin Steve. We focused on expanding the business to the last few states plus automating operations as much as possible. Ultimately, we sold the business in 1992, ending the long family history with the company. Much of it still exists today in Sioux Falls as CNA Surety. 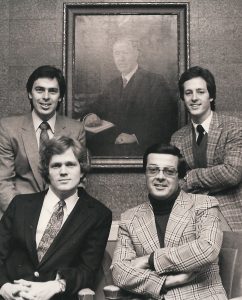 Kevin, Steve, Dan and Joe Kirby in front of a painting of their great granfather Joe

Each of the four of us has done some interesting things after selling the company. Dan led the effort to create the Washington Pavilion. Steve became Lieutenant Governor and built a venture capital business. Kevin worked to change the way addiction is treated in this country. And I initiated the successful effort to change the form of Sioux Falls city government.