Too Many Governments in South Dakota

We like to think our state is a great example of small, conservative government at its best, with minimal wasteful spending. But I suspect we may be fooling ourselves. By historical accident, we now have too many governments in South Dakota. And they aren’t laid out in a way that makes sense today.

South Dakota was expected to be a well-populated, rural state just like the states east of the Dakotas. At least that is what early leaders and promoters assumed as they created an extensive statewide system of local governments to serve all those rural citizens.

They blanketed the state with 66 counties, each designed so that the county seat would be a day’s horse ride away. They also created an extensive network of cities, towns, townships, villages and school districts.

The world changed in the 20th century. Innovations in communication, transportation and especially agriculture altered the way we all live, and where we live.

The population of several South Dakota counties evaporated. In 2010, 11 met the traditional Census Bureau designation of “unsettled” or frontier territory having two or fewer persons per square mile. Five more have fewer than three and they are continuing to lose residents.

South Dakota leads the nation in the number of counties with a population of under 5,000. It also has the nation’s poorest county, Buffalo, and its smallest county seat, Gann Valley, with a 2010 census count of 14.

Urban Areas Grew and Spread Out

The number of urban areas in South Dakota has grown, and some have spread out over boundary lines set long ago. For instance, the Sioux Falls metropolitan area has stretched to the point that we now have seven separate school districts. 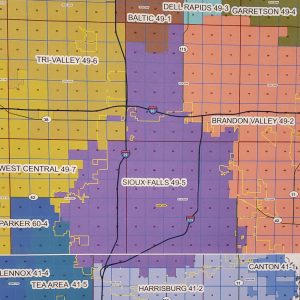 Sioux Falls is divided by school district boundaries, separating neighborhoods and neighbors. Presumably, there could be different school start dates, holiday schedules, and all sorts of other things that don’t make sense for our one community.

Our city is also needlessly divided between Minnehaha and Lincoln counties. Many Sioux Falls residents must leave the city to drive to Canton for various county services. These artificial old boundaries have to inhibit building a shared sense of community in our city.

I suspect our number of remaining cities, towns and townships is probably not out of line. I assume they may be mostly necessary and reasonable as is. But our number of school districts seems excessive. We still have over 150 school districts remaining, even after some consolidation efforts decades ago. That’s a lot of superintendent and administrator salaries to pay.

South Dakota has an enormous opportunity to reinvent its system of government. Imagine starting from scratch, with a clean map of our state, and laying out a logical new structure for delivering government services based on today’s communication and transportation realities. Such a plan would bear little resemblance to what is currently in place. We would undoubtedly have fewer counties and school districts, but not necessarily fewer schools.

A streamlined local government system in South Dakota could improve transparency, efficiency and consistency.  It might also free up limited resources for other pressing needs in our state like education, health care and prisons. And logical boundaries could produce other benefits as well.

A single metro government and single school district for Sioux Falls would seem to be more efficient, equitable and logical. Maybe in some other metro areas like Rapid City and Aberdeen too. Unfortunately, I don’t know much about their unique situations.

Time to Study the Opportunity

I believe this opportunity deserves serious study in our state. I certainly don’t pretend to have all the facts, let alone any of the answers. At this point, no one knows how much could be saved annually, but it may be significant.

We don’t know how many “extra” school administrators and county officials we might have. We also don’t know what the “right number” of counties or school districts might be for a state like ours, with a small population spread over a geographically huge space. We can’t know until someone takes the time to study it. But of course, there’s always a political risk when proposing a disruption to the status quo.

Some brave politicians have asked tough questions about consolidation in the past. In the 1990s Representative Bill Peterson talked about cutting the number of counties and school districts in the state. He wondered if South Dakota should have only forty counties and eighty school districts. Or twenty of each. He proposed a dozen of each.  Unfortunately, it didn’t generate much serious discussion in Pierre. 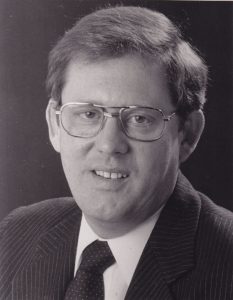 In a similar vein, in the mid-1980s Governor Janklow recognized the ridiculousness of our state maintaining seven universities. He turned one of them into a prison. That was an impressive example of leadership. But it only went so far.

I suppose one could argue that the current system provides much needed jobs around rural South Dakota. It probably does, but at a price. A study might help us understand the costs and benefits of such a rural welfare system. And maybe there is a more efficient and equitable way to help our rural areas.

In the meantime, I believe it is important to recognize that we are likely not operating our state as efficiently and cost-effectively as we like to think. While we are busy in Pierre pinching pennies on education, healthcare and prisons, we are spending significant sums to sustain an unnecessarily large governmental infrastructure around the state.

Next time someone suggests to you that our state is well-run fiscally, ask them when we last studied the potential cost savings from consolidation.