South Dakota counties are structured and operate in accordance with state law. But it’s a one size fits all model that doesn’t fit our county well. With roughly a quarter of the state’s population, Minnehaha County would be better served by a more flexible approach.

Many Department Heads Are Elected

Minnehaha County is required by state law to fill too many department head positions by election. Department heads should be hired based on their education, training and experience, not elected based upon their political connections.

The state’s model stipulates that counties elect five commissioners (legislators), a sheriff, a state’s attorney, a treasurer, an auditor and a register of deeds. Inattentive voters are somehow supposed to evaluate the professional qualifications of the people running for all of those positions.

South Dakota’s statutes include numerous detailed rules on how things should be done by local governments. But those rules don’t always seem appropriate. That’s why the state’s constitution gives cities and counties the ability to adopt home rule charters to provide them more freedom to operate in ways that make sense for their circumstances. It permits increased local control.

Home rule charters have been successfully adopted in Sioux Falls, Aberdeen, Brookings, Watertown, Pierre and five other South Dakota cities. Sioux Falls has thrived under the home rule government adopted by voters in 1994.

Sioux Falls voters got rid of a system where city commissioners were elected to fill supervisory and management positions, just like in our county today. It did not work well. Underqualified people ran and were sometimes elected.

I understand the county tried to adopt a home rule charter a couple decades ago. But it reportedly failed because the model proposed didn’t address the efficiency issue and wasn’t well promoted. It’s time to try again and to do it right this time. 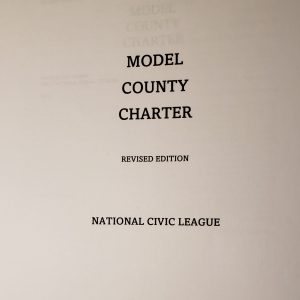 The county commission has the authority to approve a charter and put it on the ballot for voters to consider. Using the National Civic League’s model home rule charter as the starting point, they could basically duplicate how things now operate, except that voters would fill fewer elected positions. That reduction would likely be the county’s main initial benefit, but they will probably also eventually find other efficiencies from the increased local control.

While Sioux Falls city government is relatively well-funded, Minnehaha County has struggled to make ends meet. Minnehaha County commissioners work hard to adequately fund a number of the county’s important functions. So, for years I and others have suggested that they adopt a home rule charter to improve the efficiency of operations. But nothing has happened.

This is an obvious improvement that should have been made long ago. But that’s not how government works. The status quo is jealously guarded. No one wants to take on a group of elected officials. Perhaps that discomfort could be mitigated by having the charter take effect a few years after being approved.

Stepping Stone to Even Greater Change

For the sake of efficiency in government, Minnehaha County should establish a home rule government. Some other South Dakota counties should consider it as well.

I recommend a model where voters elect only the five commissioners, the sheriff and the state’s attorney. All other jobs would be filled, when necessary, by either the commission or the county administrator who would presumably hire the most qualified people available.

If Minnehaha and Lincoln County both adopted home rule charters, perhaps that might someday lead to serious consideration of an even more important efficiency move: consolidation.